Camarillo, CA (May 2, 2016) – Team BTO Sport-KTM-WPS continued their East coast swing  and headed to E. Rutherford, NJ for round 16 of the 2016 Monster Energy Supercross series inside Metlife Stadium. Team rider Justin Brayton bounced back for a top five finish while Benny Bloss made his first 450 main event for Team BTO Sports. 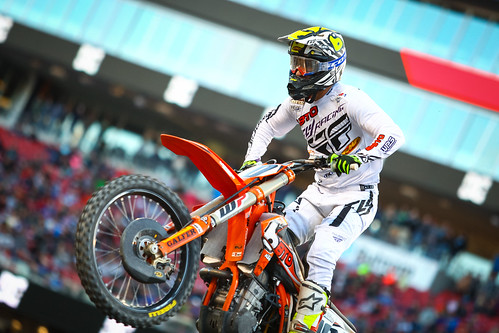 Justin Brayton had the fast line around Metlife Stadium from the start of the day, as he posted the 8th fastest lap in timed practice. Brayton brought that confidence into his heat race, where he launched out of the gate right to the front of the field. He would ride strong throughout his heat race, holding off the competition to finish 3rd and directly transferring to the main event.  Once again, Brayton was on with his starts, as he grabbed a handful of throttle out of the  gate and rounded the first turn inside the top three. His speed and smooth style allowed him to hold down 3rd place for most of the race, and at the checkered flag Brayton would hold it down and finish the night in 5th place. With one round to go , Brayton moves back to 8th  place in championship points and is gunning for 7th place.

“I felt solid tonight” Brayton said. “I figured the track out early and felt confident out there. We will be ready to finish the season strong next weekend in Las Vegas.” 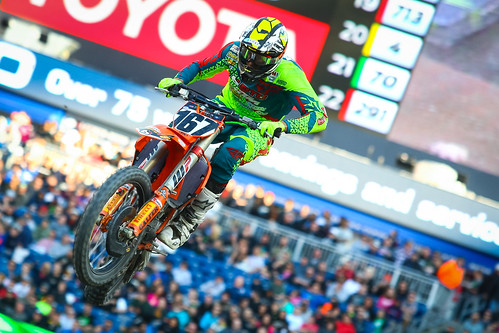 Benny Bloss made his first 450 main event at Metlife

After impressing the team last weekend at Foxborough, Benny Bloss once again suited up for Team BTO Sports at Metlife Stadium.  He showed speed in practice, and brought that confidence with him to the night show. After being taken out in his semi while being in a transfer spot, he came back to make the main through the LCQ where he took control of the race from the beginning. He rode strong to take the win and a spot in his first every 450 main event. In the main, Bloss rode with aggression, holding his own in the field, finishing the night 19th at the checkered flag.

“I felt good tonight” Bloss said. “I was more confident out there this weekend and looking forward to doing better in Vegas.”